Welcome to Shoemakersville Fire Company No.1

The Shoemakersville Fire Company #1 has a prosperous history dating back over 100 years. The company was founded on November 4, 1909 with nine charter members. Upon organization of the fire company, a constitution and bylaws, similar to those of the Union Fire Company of Hamburg, was adopted. After the bylaws and constitution were adopted the fire company then looked into the purchase of its first engine, and In April of 1910 an engine was purchased at the price of $2,000 cash and was housed with the Chief Engineer, Grant Allenman, until an engine house was erected. In 1915 the fire company had been offered a property for $900.00 and by unanimous vote was accepted, the property was that of the Board of Trade, an old factory.

In July of 1920, the first engine house/meeting hall was erected on the site of the former factory and all meetings were then moved into the hall. The company decided to expand its apparatus in 1926 and appointed a committee to research prices on a motorized pumper, and in 1927 a 1926 American LaFrance 500 GPM pumper was purchased, and the former chemical truck was then scrapped. Recognizing the need for fire police in the borough and township the borough council held a special meeting, and in March of 1940 the first 6 Shoemakersville Fire Police were selected. Also in March of 1940 a 500 Gallon Hahn Triple Combination pumper was purchased, bringing the apparatus total to 2.

In 1951 the fire company decided to expand its building and purchased the Hollywood Hotel from Petrus and Carrie Koopman for $26,000 to be used as a social quarters. The purpose of the quarters was to hold events to the public as well as weddings and banquets for the fire company. The fire company also started to look around for prices of different auxiliary trucks and in 1952 they purchased a Chevrolet truck for $2,500 bringing the total apparatus to three. Realizing the need for more space in order to house the apparatus the existing engine house was remodeled, with the existing stage being torn out. Members from the fire company also began taking classes and other fire schools when needed.

In early 1955 the company realized the need to replace the 1926 American LaFrance pumper and formed a committee to research prices and design specifications on a new pumper. In January of 1956 a Segrave pumper, mounted on a 212 horsepower International truck, with a 750 GPM pump and a 500 gallon booster tank was purchased for $15,000. The 1926 American LaFrance was then sold to a Centerport Committee, for $200.00, who later organized the Central Berks Fire Company. Realizing the need for a rescue truck the committee then designed a rescue truck with a Ford Chassis. It was delivered in 1963 bringing the total apparatus to 4.

Again in 1964 a committee was appointed to design a new pumper to replace the 1940 Hahn. They decided on another Segrave pumper, again mounted on an International Chassis, with a 750 G.P.M. pump and a 500 gallon booster tank for $16,500. Also during this time the fire company appointed a committee to design plans for a new engine house and social quarters joined together. In 1975 a contract was approved to erect a new engine house/social quarters at 300 Church Avenue, the fire company’s present location today. The company again formed a truck committee in 1984 to replace the 1956 Segrave engine. In 1986 the fire company too delivery of a 1986 Pierce Arrow Pumper with a Detroit Diesel Engine. The pumper was purchased with a 1250 G.P.M. pump, a 750 gallon booster tank , top mounted pre connected deck gun and a hose bed capable of holding 5” hose. The truck was immediately placed into service at a cost of $116,000. On September 12, 1987 a parade, housing for the new engine, and a mortgage burning ceremony was held to celebrate the paying of the mortgage in full, and the delivery of the new engine. At this time ground breaking ceremonies were also held for the erection of the banquet hall as an addition to the social quarters.

In November of 1963 a Junior Fire Brigade was organized for youths to assist the firefighters in prevention, control and extinguishment of fires. The organization still has many active juniors and currently allows any juniors ages 15-17 years of age to join.

The fire company appointed another truck committee in 1991 to look into the purchase of a new rescue truck, to replace the 1963 Ford, and on March 1, 1992 a Life Line RSQ Rescue Body on an International Chassis was delivered at a cost of $119,278. The new rescue truck included an electric winch, 4 cylinder cascade system, and a 12kw generator, purchased by the ladies auxiliary. In 1993 the fire company held a special meeting to discuss the purchase of a used 1980 Maxim pumper, from Levittown N.Y. Fire Department at a cost of $63,000, to replace the 1956 Segrave still in service at the time. The fire company took delivery of the truck in August of 1993.

Realizing the need for a water rescue company in the area, the fire company sat down with a special meeting with the executive board with a proposal to purchase a Bombard Tropic Inflatable boat. In 1996 the fire company was given the go ahead to purchase it and upon its arrival it was immediately put into service.  Since then, the water rescue / ice rescue complement has grown to 4 boats w/ motors, drysuits, underwater cameras and more.The fire company then sent members to take classes in water rescue operations. We also eventually bought a travel trailer to haul our water and ice rescue equipment to emergency scenes.

In 2004 a new apparatus committee was formed to design a new engine and a tanker to replace the 1980 Maxim and the 1985 tanker. The committee decided on Central States Rosenbauer for both trucks, with the work being done by East Penn Fire Apparatus, in Schuylkill Haven. The first priority was to replace the tanker, and the committee decided on a 2005 Freightliner Chassis with a Central States body. The tanker was also designed with a 2000 gallon Poly Steel tank, and a 1250 G.P.M pump. After the tanker was designed and being built the fire company then started to design a new pumper to replace the Maxim. The committee again decided on Central States Rosenbauer to be built by East Penn Fire Equipment. The custom pumper was built on a Spartan Advantage Big-Easy Chassis and includes 1000 gallon Poly tank, 20 gallon Class A Foam cell with a foam pro 1600, 1250 G.P.M. pump, and a 10kw hydraulic generator. The new engine was delivered to the fire company on June 23, 2006. It is the primary truck on all structure fires and second due on all MVA’s.

In December of 2006 the fire company purchased a 2007 Ford F-450 Crew cab truck to replace the 1975 Ford brush truck still in service. The new brush truck arrived in early 2007 and was placed into service shortly after delivery. It is the primary truck out on all brush fires and is also our primary truck for all Quick Response Service (Q.R.S.) calls in the borough and the township.

In 2009, a Rescue Truck Committee was put together to look into replacing our 1992 International Rescue Truck that was still in service. After looking at Rescue Trucks from in and outside of Berks County similar to the one we wanted to purchase, the committee decided to purchase a Central States / Rosenbauer Heavy Rescue Truck mounted on a Spartan Metrostar chassis. The new rescue truck was purchased at a price of $430,000. The rescue truck is equipped with 10-person seating, 10 foot walk in command center, six pre-connected hydraulic tools, cascade system to refill breathing air cylinders, Wil- burt light tower, on board generator and pre connected pnuematic tools, just to name a minor part of what this truck is equipped with.  The rescue truck is also licensed by the Pa Dept. of Health, as part of the Quick Response Service Program.

In 2011, seeing the need of an all terrain vehicle in our area, we purchased a 2005 Polaris Sportsman 500 ATV 4-Wheeler from the federal government. It was bought at a discounted price through the federal surplus program in Harrisburg, PA.

Then in 2012, the Fire Company Auxiliary bought a 2012 Polaris HD 900 UTV for the Truck Crew. And in 2013, the Fire Company was lucky enough to get a grant for a 2013 Polaris Sportsman 500 ATV 4-Wheeler. Realizing the need to have a travel trailer to haul the ATV's and UTV, a used trailer was donated to us from Tom Schaeffer's RV dealership, which is located along Rt.61 in Shoemakersville. The ATV's and UTV are used for mountain fires, extricating patients out of secluded areas such as hiking trails and brush fires to name a few instances. 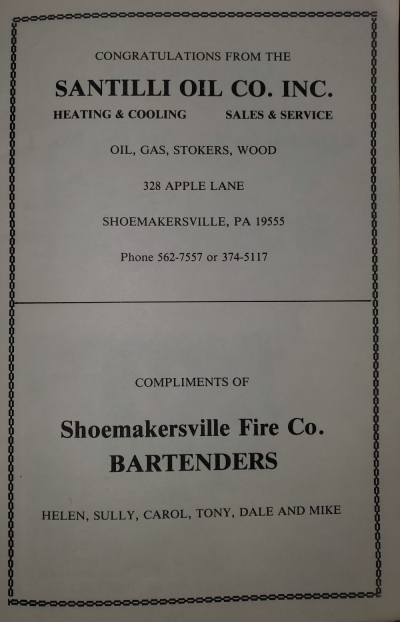 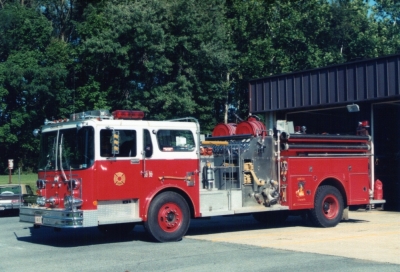 This site has been viewed 222,498 times.
Events
Pictures
Apparatus
Maintained by the members and staff of Shoemakersville Fire Company No.1. Designated trademarks and brands are the property of their respective owners. Copyright © 2006-2022. YourFirstDue Inc. All Rights Reserved. Content on this web site is supplied by Shoemakersville Fire Company No.1. YourFirstDue Inc. cannot be held responsible or liable for any content, text, pictures, or any other media found on this web site.
Management login
Powered by

YourFirstDue.com
Websites for Fire and EMS
© 2022 Shoemakersville Fire Company No.1